Messing around with variable names and pranks!

Recently I got a DM on Discord. This person did not have much knowledge of JavaScript, but they had seen this rather interesting snippet of JS which affected tweets on Twitter (now deleted). It changes a couple of very specific tweets, revealing text that wasn't previously there.

They had run this JavaScript snippet in their dev console and wanted me to explain how it worked. For future reference, if you do not fully understand a JavaScript snippet, please do not do this. They can be malicious.

How did this work? The tweets contained text that wasn't viewable by most font-sets. Many times these icons will show up as missing symbol boxes (▯ or □). These characters simply do not show at all.

These special characters are ones returned from String.fromCodePoint() when passed the first 4096 numbers starting from 0xe0000 (917504). You can "see" all of them by running the following:

Most dev tools will combine console logs into one output if they contain the same text. As these are distinct symbols, they will appear as 4096 separate logs.

As they are distinct symbols, they do indeed contain length. In fact, we could probably artifically increase this article's "reading length" by filling it with these symbols. In between these two arrows are 100 characters. You can copy/paste it into dev tools and check its length to confirm.

Note that using String.prototype.length will actually print a length of 202 instead of the expected 102 (almost double) because every character after 0xFFFF (65,535) (called the BMP or Basic Multilingual Plane) exceeds the limit of JavaScript's UTF-16 strings. The arrows (in order to be displayed on smaller font sets) has a code point of 0x2192 (8,594). To actually retrieve the number of characters in a string, use a for...of loop and take advantage of JS iterables!

or, since the spread operator also works on iterables, a bit of a simpler method:

In general, the intricacies of all of this is a bit more than what I'd like to get into. Mathias Bynens has a fantastic article on all this, which I highly advise you read for more information.

You can quickly view a character's code point via the following function:

"Astral code points" (ones after 0xFFFF, such as 🡆) also contain a second index. It will return a code point that is relational to the actual code point defined by the following expression:

or the following function

I honestly do not know why this is so. Drop a comment if you have an explanation.

While all this might be interesting to some, that wasn't why I wrote this article. I wanted to investigate variable names (hence the title). Could these special characters be used as variable names?

#Variable Names And You

Most people stick to standard conventions when making variable names in JS.

Although these aren't physical limitations, people tend to stick to them. If one developer used diacritics, it would be difficult for developers without specific keyboard layouts to replicate them.

Some other things we can't use:

Thanks again to Mathias Bynens for this info

Mathias also provided an online JavaScript variable name validator for if you would like to test things out yourself.

One thing to note is that there is a difference in valid variable names for ES5, ES5-era engines, and ES6. We are using ES6. Mathias (yet again) has an article for this.

What I was interested in was the odd stuff. A theoretical prank.

Every now and again this "meme" floats around where it advises pranking a coworker by replacing their semicolons with greek question marks (; or 0x037E).

These days, we have pretty good linters (in most languages) which will catch these. This prank can be found out very quickly. Let's try spicing things up a bit.

What information from our knowledge of valid variable names can we use for our prank?

Well firstly, Zalgo text is fine. Zalgo text is the result of combining a bunch of diacritics to extend text outside of its vertical container. It tends to look like ṱ̶͇̭̖̩̯͚̋͛͗̋h̶̳̳̫͕̄͆̈̍̓̀̉ͅi̷̥̩̼̒̏s̷̰̣̽̇̀͆̀͠ and it's both valid unicode and a valid identifier.

Since diacritics are valid in variable names, there's nothing really stopping us from combining them ad infinitum. This isn't very pleasant to look at, but it's still not what I had in mind for a prank.

We previously discussed invisible characters. What if we could create invisible variable names? Are these valid?

It doesn't seem so. And in case you were wondering, there is indeed a character there between const and =. If there wasn't, we would get a separate error.

We could use the aforementioned tool to check valid variable names, but we'd be entering characters one by one. I need a way to automate this. I can copy Mathias's code, using a ton of regex and all that, or....

-"eval is evil" but we can make an exception for personal testing. Note that I'm specifically not using let since passing a space to isValidVariableName will return a false-positive if let were used. After all, the following is valid:

As let along with 8 other words were not considered reserved keywords outside of strict mode.

With that in mind, let's get into a bit of width testing.

I want to find valid variable names with thin, weird characters. The easiest way to do this is via your eyes. Looking at characters is a pretty good way to tell how they look. Unfortunately, this is time-consuming. Especially for possibly over 1 million characters.

Let's set up some test code

The upper bound of i is just small for the initial test. The important question is how do we find out how much space a character takes up? The question is font-specific and the DOM generally will not give the specific character size, but rather the space the parent TextNode takes up.

For this, we need to use Canvas.

What you might notice is that we're declaring 2 variables outside of the scope of the function. This is generally bad practice, but this function will be called thousands of times and I want to self-optimize a bit, just in case.

If you have worked with ctx.measureText before, you might also realize I'm not using its returned width property, which should be exactly what I want. Some diacritics actually contain a negative width and the returned width will only go as low as 0. I am calculating it myself to avoid such cases.

You can view the resulting code on JS Fiddle.

The code takes a while to run, but we (at least on my machine) get an array of 3 characters. 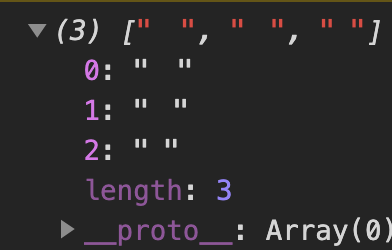 Yup. 3 spaces of varying widths. The canvas must have calculated these to be of zero width. Using these spaces, we can make some funky valid code.

I'm excluding one of the spaces as it doesn't show up on some devices (such as Android phones or Windows 10 PC's). The other 2 spaces are known as hangul filler characters. One is a half-width, which is why it's thinner.

As an aside, while this test only ran through UTF-16 characters, I have done a test involving all unicode characters and gotten the same results.

At this point, we've gotten the 2 characters that ES6 will allow us to start a variable name with, but we haven't explored all the valid variable-naming characters.

As discussed before, a number cannot be at the beginning of a variable name, although it can be anywhere after the first character.

Our isValidVariableName fails to check for this. We can use the same function, but pass in a valid character as the first symbol to fully test this out. In our code, let's change the following code:

With this code we are automatically skipping over super valid symbols and only keeping ones that are "kinda valid". We are prepending h to the symbol. This way, if it passes, it is valid only after the first character.

Using this change, we get 51 symbols (vs the 3 we originally got).

The newline (↵ or 0x21B5) character is a false-positive. It is not that the newline character is a part of the variable, it is simply getting skipped over. It reads similar to the following:

Which, due to how ASI works, is valid code. Although, only h (not h↵) has been set to 42. We need to modify isValidVariableName a bit for this checking.

By already defining h before we use the passed string, we can guarantee an error will be thrown if the ASI simply interprets this as whitespace.

Running it we get 27 array elements.

That means 24 of our previously returned symbols were whitespace characters. Here are the 27 hex codes:

It's at this point that I might as well mention that I have been doing most of these tests on a MacBook. I switch off between a MacBook and a Windows 10 Desktop PC depending on where I am. Windows 10 comes with a font containing many more unicode characters than other devices (aside for a few Linux distros).

We want our "prank" to affect the majority of users, so we won't be using the larger 119 characters that my Windows machine gave me and only sticking to the 27 that both machines seem to share.

The first 9 characters are viewable on Windows' default font, so we're going to skip to the following 18.

The first 2 characters (0x200C and 0x200D) are zero width joiner/non-joiners. 0x200B, the zero width space (and the one right behind the other 2) was not included. Probably because it's whitespace and not a valid variable name.

The following 16 (from 0xFE00 to 0xFE0F) are variation selectors. There are many more than 16, but the rest are passed 0xFFFF and thus would not come up in our search.

Here are all those characters: →‌‍︀︁︂︃︄︅︆︇︈︉︊︋︌︍︎️←

Running this code with the full extent of unicode doesn't genarate vastly different results. This means our aforementioned invisible tweet characters are not valid variable names. However, Our new characters are.

We went over a lot. We have 18 non-starting variable characters and 2 starting blank characters. All within UTF-16 (not that it's strictly needed).

Now for the "prank". Let's create a Babel transformer plugin.

This plugin will add invisible characters onto every variable name, making every variable unique. Passing this plugin to a babel transformation will render the code broken. The error messages will be even more cryptic, as nothing will seem to have changed.

Of course fixing this code manually will be extraordinarily difficult, which is why I've produced the cure as well!

I thought ending with a somewhat "practical" application of what we've found through researching unicode might be interesting.

It goes without saying, but please don't actually use the aforementioned babel transformation on an unsuspecting participant's code. This was all in good fun and learning. The resulting output can be extraordinarily aggravating to debug.